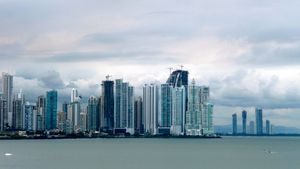 I’ve been trying to figure out a good place to retire that’s not, well… Ohio!!  I’ve lived in Ohio for most of my life and it’s done well for me, but why live in a place that ever snows?!!

The answer is simply that I have roots here… friends, family, stable job, and so on.  Pulling the trigger to move out of your comfort zone is a tough thing for most of us to do.  And the problem is that once you have kids, they start to establish their own roots, and the cycle continues.

My brother made the move probably around the age of 30 and hasn’t looked back.  He moved to Florida without a new job or knowing anyone except his wife (girlfriend at the time).  It takes a lot of cojones to do this so I give him real props.

The best part is that his move is one that can stop the cycle.  If you make the move and then have kids down the line, those kids won’t be establishing roots in the same place you’re “stuck” in.

I almost made the move in my 20’s – my wife (girlfriend at the time) and I were planning on moving to Arizona.  In fact, I was so far in the process that I had actually turned in my notice at work and let my boss know the plan.  However, a couple of days later, he made me an offer with a new position and salary boost.  It was too good to pass up and I’m just wrapping up year number sixteen with the company.

Depending on how you look at it, that was either very fortunate or unfortunate.  On the plus side, I make good money, my boss has always taken care of me, and my office is a great place to work.  Who knows if I would have been in a position this great living in Arizona?  And I’ve really socked away a good amount of money to put toward retirement.

However, I might have missed my chance.  Since that time, I’ve gotten married and have a daughter who’s about to start kindergarten.  So now if I make the move, I need to take her out of school and she has to start all over.  I still have a few years before she really makes friends that would make this even harder to do, but this is the part of the cycle that is hard to break.  And it’s not to say this is an impossible task, but my point is that it does make it more difficult to make the move with each passing day – probably until she would be out of school.

Then there’s family.  All families are crazy and I’m sure we’d all like to get away from them for a while… but down the road, your family is, well… still your family.  So that becomes part of the decision on moving.  Of course, they could always vacation down there or we could come back to visit them, but that would probably be pretty infrequent.

And, of course, there’s the job.  With my route to retire in process, the job part should become irrelevant in less than 10 years.  But for now, it’s still something keeping me from just leaving now instead of waiting.

For now it’s just a fantasy, but I would love to move somewhere with great weather, low crime, good medical facilities, and where you can get a lot more bang for your buck.

I’ve done my digging, and right now the country of Panama seems to fit the majority of what I want.

Although I’ve never been there (yet), you can find areas there with year-round 75 degree weather, low crime, medical care that equals that of the U.S. and the dollar is worth a little bit more (though not as much as it used to).

Panama is also known to be friendly to expats (people who have citizenship in a different country), particularly the U.S. because of work relationship throughout the years on the Panama Canal.

One of the biggest perks of Panama is the retiree program they offer.  Called the Pensionado Program, here are some of the benefits:

The requirements to get the Pensionado Visa are:

Pretty interesting stuff though.  And as an added bonus, as long as you continue to meet the requirements, you are grandfathered in and can never lose your benefits.

There are a lot of articles out there discussing the pros and cons of retiring in Panama (here’s one: http://www.lizlarroquette.com/the-pros-and-cons-of-living-in-panama/).  And there are also tons of articles about retiring in other places.  For some reason though, Panama has just struck a chord with me.

However, stopping the cycle would put the hard part on us.  We would need to be the ones who don’t get to see our friends as much as before.  Making close friends is never easy, but it’s even harder once you’re older because most of us get comfortable in our zone and we also don’t have places like school to meet new people.

But that would set our daughter up to establish her roots and make all of her friends there.  She would grow up knowing “paradise” as her home and the cycle would possibly then make this her new home for her future kids and grand-kids.

Well, it’s just a dream right now.  If I follow the plan, I still have another 10 years until retirement.  But maybe – just maybe – we’ll be able to make the dream a reality one day.  I just need to convince my wife that we should be the ones to move there to break the cycle.  And in ten years, my daughter will be halfway through high school, so that might present new problems.

Guess we’ll have to wait until we get closer to figure out if this will ever happen!  I think we’ll take a vacation down there to see if it’s as good as it sounds.

What do you think?  Do you have dreams or plans to move to a paradise somewhere?

10 thoughts on “Is Panama the Right Place to Retire?”