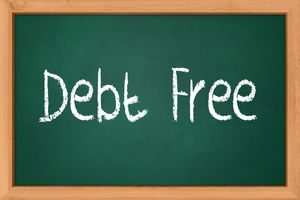 When I was in college, I got my first credit card… and then a second one.  Over time, I started using those credit cards a little too much – grabbing the check when out with a bunch of people for dinner, buying all the stuff I “needed” (which I later realized were just wants), etc.  Boy, was I the life of the party!

This, of course, got me into debt… but I’ve always been pretty organized.  So throughout my college years, I figured out that each month I could pay my MasterCard with my Visa and vice-versa.  Those balance transfer checks were great!  In fact, they actually were giving rebates to transfer my balances.  Wow!  I probably went a good year without making a payment… if I did this for another 100,000 years, those rebates may actually even pay for the debt themselves!  Stupid, yes – but what did I know?  It wasn’t until after college that things changed.

When I was in my early 20’s, I started a new job as a Systems Engineer.  They had me preparing customers to battle the potential destruction of the dreaded Y2K bug (which turned out to be nothing exciting if you don’t remember that).  I spent my days patching servers, routers, firewalls, and more.  All the big vendors released patches to fix the problem – Microsoft, HP, Adobe, Intuit, and thousands of others.

One of those patches was for Quicken – the personal finance and money management software.  Apparently, older versions of Quicken were vulnerable to the bug, but Quicken 98 (yes, it’s old) was not.  Instead of patching the older versions, Intuit basically just gave away the full version of Quicken 98 to make its customers safe.

At some point, I installed the software on my computer to check it out.  After adding all my accounts and getting everything up-to-date, I was in awe… I was in debt with credit cards over $27,000!!!  I had no idea!  I knew I owed a lot of money, but that was the first time I saw everything laid out in front of me.

This was a total wake-up call for me. I used Quicken’s Debt Reduction Planner to see when the software said I was going to be able to get my debt down to $0.   Then I spent every single day staring at Quicken for hours trying to figure out how to eliminate my debt even faster.  I worked hard to get out of debt and then stayed away from credit cards for a long time afterward because I was nervous about falling into the trap again.

Since the day I found out how bad I was in debt, I became a religious Quicken user and have bought the program every year when they release a new version.  It was that important to me.

The important take from this post is to understand:

You can’t continue down the path to retirement until you can get out of debt.

And by this, I’m referring to bad debt – debt that was used for junk…  credit card debt for buying a new TV, a home equity loan for replacing your deck for the house, even bank loans for cars.  This is the kind of debt that will stop you from ever becoming financially free or retiring early.  Later, we’ll talk about a different kind of debt – good debt – that you can (and should) leverage to help use other people’s money to make money.  But for now, you need to start with getting completely out of bad debt without excuses.

It’s hard to know where you stand financially unless you get everything on paper, so to speak.  For me, Quicken was the answer and I highly recommend it.  I tried out Mint (now also owned by Intuit) for a little while, but it doesn’t keep track of everything like Quicken can so I’ve continued with Quicken.  And Quicken isn’t your only option (https://goo.gl/rj5F8d) – there are a ton of other options to help manage your finances so find what works best for you.  You might even be able to get away with using a simple spreadsheet as long as you can organize ALL you finances with it to get the whole picture.

I’m not here to tell you how to get out of debt.  This is going to be different for everyone, but if you’re serious about becoming financially free, you find a way – there’s always a way.  Take a step back and figure out what you’re wasting money on and stop it.  Put more money to paying down your debt until it’s completely gone.  I still negotiate on all my bills to get better rates from my cell phone and cable (both NOT necessities) to gas and electric.  Again, there’s always a way to do this – figure it out.  This is a job you can’t afford to fail at.

Make getting out of debt a priority and, not only will you feel better, but you will put yourself on the route to be able to retire much sooner!