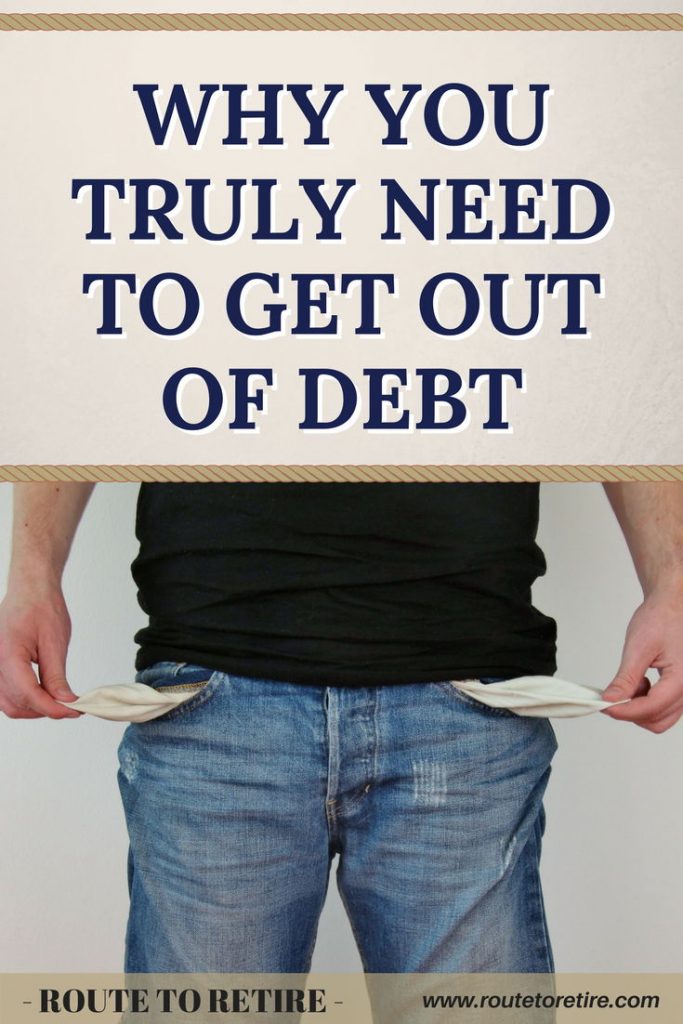 It’s nothing new to hear that if you’re in the red, you should make it a priority to get out of debt.

NerdWallet states that the average household that has credit card debt is carrying a balance of $15,654… ouch.

And that doesn’t even count other forms of debt – mortgages, car loans, student debt, etc.

If you’re in debt now and you’re reading blogs like Route to Retire, chances are you’re already working on digging yourself out.

However, I implore you to push yourself to get out of debt even faster.  Regardless of how you found your way into it, it’s something you need to find a way out from.

Not only can debt make your day-to-day life a little tougher, but it can also have a dramatic effect on your financial future.

Been there, done that…

I’m not here to judge – I’ve been there too.  I was almost $30,000 in credit card debt around the time I graduated college.

When I started my current job shortly before graduating in 1999, I was brought in to help fight the infamous and deadly Y2K bug… which turned out to be not so deadly.

However, it also turned out to be a great opportunity for me.  Not only did that open up a path for a heckuva long term of employment, but it also opened my eyes to the debt situation I was in.

How?  One of the software patches we were installing was for Quicken.  Intuit basically said, “Hey, if you’re running a really old version of Quicken that’s not Y2K compliant, we’ll give you the full version of Quicken 98 to at least upgrade to for free.”

I ended up installing it just to check it out and they gained a lifetime customer because of it.  This was before aggregate services like Mint or Personal Capital.  So this was the first time I actually saw all my finances in one place… and it wasn’t pretty.

Seeing how bad off I was depressing and made me feel guilty.  But that’s good because I turned that depression into anger and channeled it into finding a path to get out of debt.

Just like a lot of others are doing, I put my nose to the grind and worked my way out of it.  I then paid off my student loans and, once married, we knocked out my wife’s student loans as well.  Since then, we also decided not to buy things like new cars anymore either.

So now all we’re left with is our mortgage on our house, which we’re aiming to have paid off in the near future.  We also have one mortgage left on one of our rental houses.  However, that’s a different kind of debt since that debt makes us money, so I’m not too worried about that.

Why you should aim to get out of debt even faster

Getting into debt is easy.  Getting out of debt is so-o-o-o-o slo-o-o-ow.  It’s like walking across a field filled with deep mud.  Your feet get stuck and each step is difficult, slow, and tiresome.  You feel like you’ll never get to the other side.

Working your way out of this mess needs to be a lifestyle change in how you move forward.  It becomes a matter of patience to climb out and along the way, you routinely feel like you’re just not getting anywhere.

But here’s the bigger problem with being in debt…

Even if you’re on the “road to recovery”, you have to realize that all that time it takes to get out of debt is time lost… and that’s the more unfortunate problem.

As I mentioned, the average amount of credit card debt hanging over the typical American’s head is $15,654.   The national average APR (credit card interest rate) in 2017 was 15.59%.

If you plug these numbers in a calculator like this one at CreditCards.com, you’ll see that it would take 215 months (that’s 17.92 years!!!!) to pay off your debt when making the minimum monthly payments.  You’d also be paying $11,586.48 in interest charges… hoofa!

However, that assumes your first minimum payment is $469.62 and it goes down after each payment along with your balance.  Let’s be more optimistic and say that you’re going to pay the $469.62 every month regardless of the minimum payment going down.

Bankrate’s calculator says you’d be paid off in 44 months.  That’s a lot of time (just shy of four years), but still better than the almost 18 of just paying the minimum payments.

Now imagine if you were able to sock that $469.62 away every month instead.  For giggles, let’s assume a 7% return stock market rate of return.  Investing that money every month for four years would yield you a stash of $25,813.98!

That’s almost $26k that will continue to grow and help build your future.  If you then just left that money alone and didn’t add any more to it, it would be worth around $100,000 in another 20 years.  Crazy, right?!

Instead, though, getting out of debt helps you break even and merely get yourself out of the red.  It’s still a feat to be commended, but it’s not a perfect finish line.

It sucks and I can relate.  I hate to think just how much further we could be ahead of we hadn’t missed out on that time that was wasted paying off consumer debt.

It’s easier said than done, but you need to get out of debt fast.

It might seem like you’ll never be able to dig yourself out, but you need to do it and you should strive to find a way to do it as fast as possible.

Whatever the reason is that got you into this mess, you need to come up with a plan to get yourself out.

I urge you to make some sacrifices to make it happen even faster.  Depending on your level of debt, that may be easy to do or it might require some major life changes.

Maybe cutting back on the low hanging fruit from your expenses could be all it takes to make a difference.  Small, yet important things like cutting out or reducing your cable package or looking at cheaper cell phone plans (we use Total Wireless and love it!) might suffice.

But if you’re further on down the slippery slope, it might be time to do some soul-searching and look at making some bigger decisions.  Focus on the big three: housing, transportation, and food.

Think about it – downsizing your house can be a hard idea to consider, but think about how much this could help your financial future!

Whatever changes you decide to implement might make you feel like you’re giving up on the things you’ve worked to attain.  But in all actuality, those changes will actually slingshot you much further ahead down the line financially.

Whether you’re hoping to pursue financial independence or too just tweak a few things in your life to improve your finances, debt is like the poison.

Avoid it like the plague and if you’re already in it, get yourself out as fast as you can.