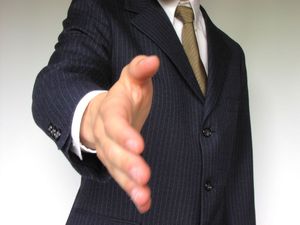 I’ve talked a little bit about the company I currently work for, but I wanted to share an interesting scenario with you guys.

The company I work for employs around 50 people.  In the managerial hierarchy, the company president is obviously the big dog.  I (along with a couple other managers) report directly to him.  There is also a vice president of sales, but I don’t directly report to him.

Now, here’s the “what if” scenario…

The president of the company is getting closer to retirement.  He hasn’t come out and said that he plans to retire, but it’s going to be happening and I’m going to guess we’ll see it happen over the next few years.  I would also guess that when it does occur, it will probably be a phased retirement… maybe he starts taking some long weekends, then dropping down to a few days of work a week, and then eventually retiring.  So what happens then?

What will probably take place at that time would be that the current vice president would take over running the company for a while.  He’s also a silent partner in the company.  As a side note, this is the same VP that I talked about previously that I consider a financial mentor.  He’s very savvy… however, he’s no spring chicken.  I would imagine he’ll be completely retiring himself within ten years (about the same time I plan to).

So now they have some options of what they can do with the company – here are a few:

If I were a betting man (I am when I’m in Vegas!), I would bet that the employee-owned company will be the direction they will go.  It’s a win-win for everyone involved if carefully executed.

Using an employee stock-ownership plan (ESOP), a trust fund is created and then shares of the company are purchased using that fund.  Employees then receive shares based on whatever structure the employer creates for the ESOP (years with the company, performance, etc.).  When an employee later leaves the company, shares are then purchased back at fair market value.  This gives the employees the opportunity to cash out the stock that they’ve accumulated over time.

The company has some very loyal employees so this would be a great opportunity for the owners to give back.  I would bet the average time with the company is at least 15 years, with some employees even pushing close to 30 years.  A good number of new employees are hired for growth, not as replacements to employees leaving.

Now don’t forget, I actually like my job… I just don’t like working.  I feel like there are better things I could be doing.  The place I work is a solid company (currently about an $11 million company) and one that I enjoy being a part of.  However, I don’t want to be stuck working a day past financial freedom if I can help it.

This “what-if” post is already giving me a headache just thinking about it!

The other what if would be, what if my role changes after their exit from the company?  I could end up picking up more or too much responsibility that I’m not after any longer… or possibly a stronger role in the company.

So now what happens?  What if the way this is structured means I would need to stay there for X number of years in order to reap the rewards?  Could I be “stuck” there past the target retirement date if I want to take advantage of this opportunity (e.g. a minimum number of years to be vested)?

Something big is going to happen in the next few years… and I’m not sure I want to be a part of it. Especially if it keeps me working full-time past my retirement goal.  The hard part is always going to be money.  Yes, I will reach financial freedom before 2025, but owning a piece of the company would probably be a good chunk of change to make the retirement life a little smoother.

Again, this is all just speculation on my part, but what if?  If this does happen, it would definitely be a good problem to have, but still one that would be really tough for the guy with retirement already in his sights.  What would you do if you were in this position?