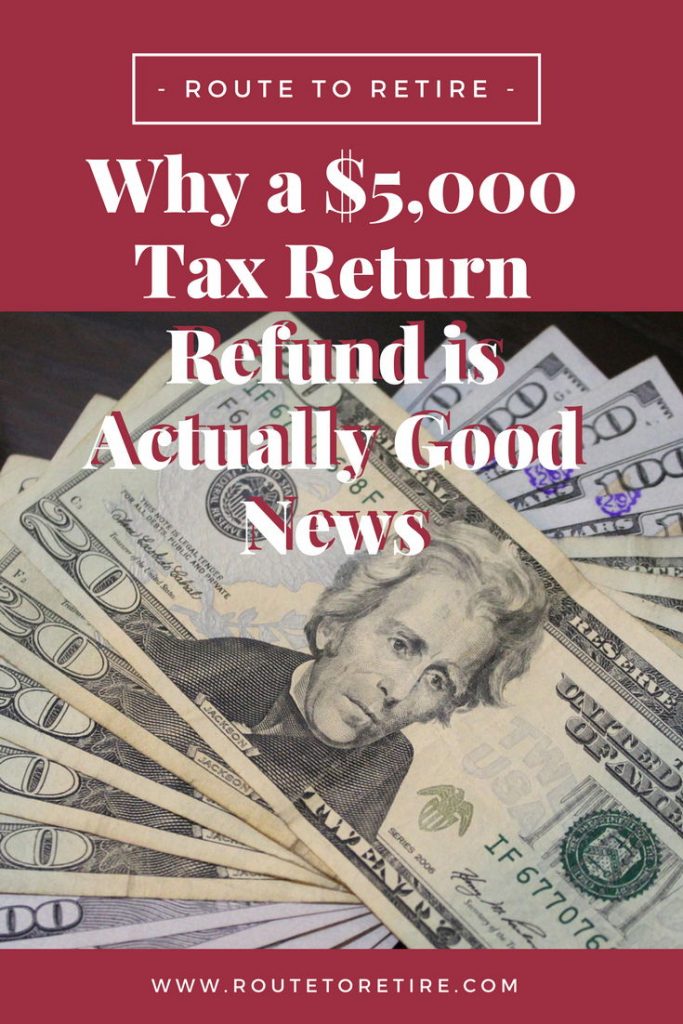 There are some folks out there who are enthralled by the idea of taxes.  The idea of working on their tax return actually excites them every year.

I’m far from being one of those people.

Unfortunately, love ’em or hate ’em, if you’re in the U.S., you’re stuck with doing a tax return every year.

There’s a part of taxes though that I don’t really get.  It’s the idea that if you get money back on your tax return, you did something wrong.

And the higher your refund, the more your year was botched.

This year we got around $5,000 on our tax return (between federal and state).  That’s quite a bit more than we usually get back.

Let’s talk about why I disagree with this advice and why I think a healthy refund is actually a good thing.

A big push with doing your taxes is to try to get your tax return liability as close to zero as possible.

On one end, you obviously would prefer not to owe anything to Uncle Sam.  And that makes sense… who really wants to be stuck with owing the government some bucks at the end of the year?

Not this guy, that’s for sure.

But on the other end of the spectrum, you’re not supposed to want to get a big refund back.

The encouragement is to use the IRS Tax Withholding Calculator to adjust how much you have taken out of your paycheck at work to keep your tax return close to zero.

And why don’t you want to have a big refund on your tax return?

Because that means you just gave the IRS an interest-free loan for the year.

Or so the logic goes… but I ain’t buyin’ it.

My problem with the no big refund advice

The idea is that instead of giving the government an interest-free loan, you should be investing that money elsewhere.  After all, even a crappy bank interest rate of 0.01% is better than the 0% you’re getting giving it to the IRS all year.

For example, my tax return (federal and state combined) yielded a refund of around $5,000.

Ally Bank is the online bank I use for my emergency savings – my cash stash so to speak.  As I write this, they’re currently paying an interest rate of 1.45%.  That’s over 48 times better than the 0.03% my credit union is paying!

So let’s go with the idea that I spread out the contributions throughout the year and deposit it into my Ally account.

That means I would have lost $43 over the course of the year by “loaning” that money to the government.  And sure, $43 is better than nothing, but it’s also not going to be what puts you over the top for your retirement plans.

And yes, you could put that money into something a little riskier, like the stock market, and possibly have gotten a bigger return.  However, it’s also possible that it could be worse depending on how that year goes.

Sounds good, Jim – I’ll take my interest any way I can!

I get that.  But for this to work, you would have to be so focused that you’re planning ahead at the beginning of the year and actually putting that money into your account in the first place.

Most of us aren’t that disciplined.

Hopefully, you’re on track automating your savings and investments.  However, are you really anticipating how your tax return is going to go a year in advance and investing that money throughout the year?

Unlikely.  There are probably a few of us that do that (props to you!), but most folks really wouldn’t fall into that category.

And that being the case, it’s very likely that money would instead slowly disappear into routine spending throughout the year.

Yes, that’s the exact opposite of paying yourself first.

The Route to Retire Logic

Let’s look at this from a different angle, however.

What if you don’t optimize your taxes to try to stop from getting a nice refund back from your tax return?

That means I failed the mission, right?

I don’t think so.  We have a strong personal savings rate – close to 60%.  That’s relatively high – especially since that’s with Mrs. R2R not working.  Scraping more off the top can be a struggle sometimes for us.

However, a nice lump sum of $5,000 from a healthy tax return is a little bit different.  It’s almost like a small windfall.

We can actually put some of that toward the cruise we recently booked and still have enough to invest a sizable chunk.

Instead of letting that money disappear into our regular spending throughout the year, we have other plans.

Once the refund came in, I immediately moved it over to my online account at Ally.  That will give it about 6 months to grow and gain some interest before we need to pay off our cruise.

In theory, we’d then pull that money out to pay for the cruise, but that’s really not going to happen.  That’s like my black hole for money – once it’s there, it stays there.  It is for emergencies after all.

In other words, we’ll now benefit from that chunk of money being in our savings for the coming year… something we likely wouldn’t have made happen otherwise.

Side note on our tax return refund

To some of you, $5,000 is a tiny refund.  To others, however, you’re probably wondering how we got back a nice amount like that.

If you have delved into either category of income, know that there are great incentives for doing so.

The government encourages those who provide housing or start their own businesses.

Rental properties allow you to make money from rental income but still be able to show a loss on your tax return… legally.  Depreciation can be a landlord’s best friend!

Small businesses are very similar in that you can reap the rewards of being able to write off expenses you wouldn’t be able to otherwise.

As we’ve continued to go down both of these roads, we’re seeing more opportunities to make money while paying less in taxes.

If you haven’t veered off a regular W2 income yet, it’s definitely something to consider.  You might be surprised at just how many great opportunities are out there!

Do you aim for a tax return of close to zero or do you have a “show me the money!” philosophy?