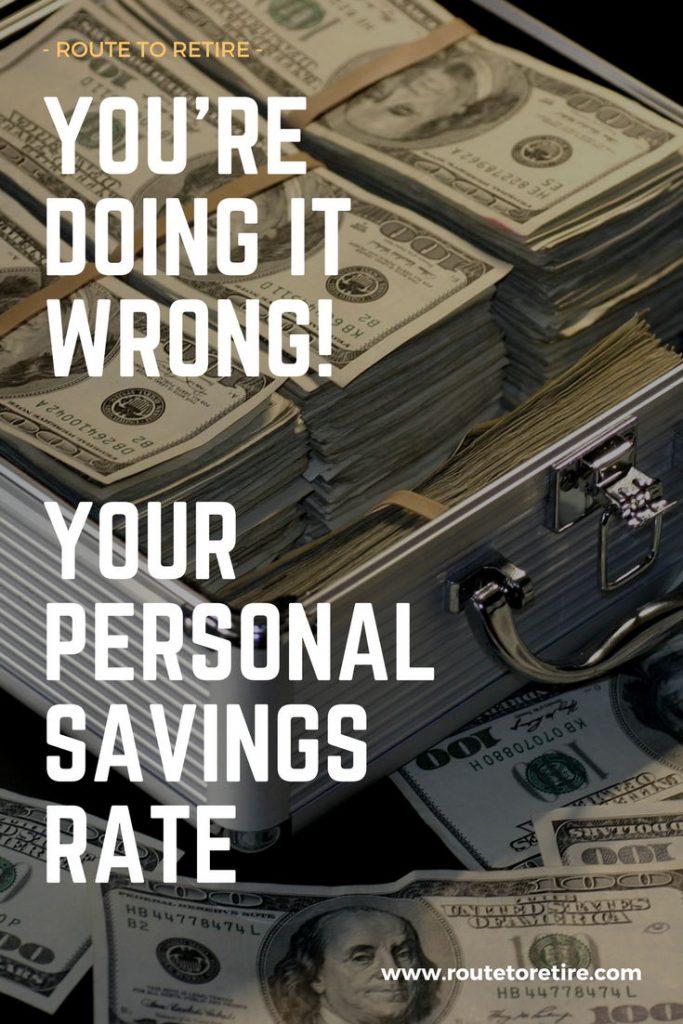 Here’s the problem with calculating your personal savings rate… you’re doing it wrong!

Ok, maybe you’re not, but I sure was!

First off, let’s talk about what your personal savings rate is.  In essence, it’s a metric to be able to determine what percentage you’re putting away in relation to your income.

In other words, it provides a good way to tell at a glance how well you’re saving.

Someone might make a ton of money at his or her job, but if that person’s spending it all, it’s really all for nothing in the long run.

However, someone else might not be bringing home a large salary, but if she’s stashing away a good percentage of it, she’s going to be worlds ahead.  And not just because she’s saving more, but also because she’s learning to live on less.

And that’s the world you want to be a part of – living off a smaller portion of your income and putting away the most money you can.

The good news is that figuring out your personal savings rate is not that complicated.  In a nutshell, you’re dividing what you’re saving by your income and then multiplying by 100 to get your percentage…

Let’s break it down a little further just to make sure we’re all on the same page.

First, your savings rate is going to be based over a period of time.  You calculate based on a week, month, year, or whatever.  Personally, I think it’s a little more accurate to look at a period of a year since it will help average out some of the bumps along the way (commissions or bonuses, higher spending weeks or months, etc.).

Next, you’ll add up everything you’re saving over that period of time.  Here are some of the things to include:

Then, you’ll add up your income after tax over that same time period:

Now, divide your savings amount by your total income after tax.  Finally, multiply by 100 to give you your personal savings rate percentage.

Here’s an example of my made-up friend, Chuck.

Now we have enough information to determine the savings rate…

Add a little rounding in there and Chuck’s got a personal savings rate of 40.13%.  Not too shabby!!

Keep in mind that there’s not really a perfect standard for this formula and it seems like a lot of people do it differently.  For instance, some folks include their debt payments (principal only) for things like their mortgage as part of their savings and some don’t.  I don’t personally include that in my numbers.

What I Was Doing…

I was doing things a little differently.  Because I had a spreadsheet I was using for other retirement purposes, I was basing my numbers off that for a “simplified” calculation.

My spreadsheet kept track of some of my expenses and what I was socking away.  So I was just doing a comparison of the two.

The problem with this is that it didn’t have all the numbers in it, so it wasn’t telling the whole picture.

Regardless, my quick and dirty formula resulted in a personal savings rate of around 35%.

Even though my number wasn’t accurate at the time, let’s see how it compares…

The federal Bureau of Economic Analysis keeps track of the personal savings rate for the United States.

Unfortunately, the numbers show a less than 5% savings rate… and that’s with me trying to make it sound a little better than it actually is.  As I’m writing this, the rate was hovering around 3.8%.

That means that for every hundred dollars the average American gets, they’re hanging onto less than 4 bucks and spending the rest.

Who Cares About This Number Anyway?!

Maybe you don’t think this number is very important.  However, your personal savings rate can help put your savings in perspective.

For some of you, it could be a real shock factor to see that you’re barely putting anything away for your future.  For others, you might be light years ahead and strongly on track financially.

If you’re hoping for early retirement though, don’t plan on doing it by sticking with the national average.  A measly 5% isn’t going to cut it.

In order to make early retirement a reality, you really need to get your percentage to at least over 30%.  Moreover, the faster you want to make it happen, the higher you should push that number.  A rate of 50, 60, or even 70% is what you really want to strive for if possible.

And guess what – it’s probably going to sting a little bit.  But it’s a matter of how strong you really want financial independence and early retirement.  An expensive home, fancy cars, the latest gadgets, and all the other crap that society pushes on you are generally going to be what holds most people back from making this happen.

The good news is that now that I’m calculating our number correctly and I can see that we’re floating right around 60%.  And that’s with Mrs. R2R no longer working.

That’s much better than the 35% I initially thought we were doing and I’m definitely proud of our savings rate.

Some of you might be reading this and thinking that number’s too steep, especially for one income.

I can’t tell you if that’s too high of a rate for you.  However, in our case, I think we do just fine with it.

I make a decent living, but not anything earth-shattering.  You know what though?  We’re not really wanting for anything over here.

The only exception to this is that I want to quit working.  So the good news is that our personal savings rate is putting us on the track to make that happen sooner than later.

What’s your personal savings rate?  Are you happy with where it’s at or are you thinking you can push it higher?

17 thoughts on “You’re Doing It Wrong! Your Personal Savings Rate”