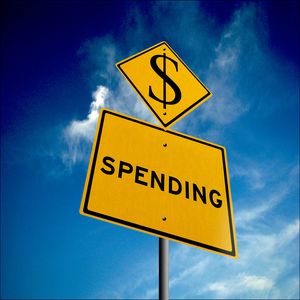 While in school, I ended up getting a good part-time job at Walmart, which soon became a full-time job.  This was followed by a couple of department manager positions and then an assistant manager role at a few different stores.

This all happened within the frame of a couple of years and I was working between 50 and 60 hours a week while still carrying a pretty full load at school.  I didn’t get to party all the time like a lot of my friends due to lack of free time, but I still managed to squeeze in enough parties to make sure that I got the full college experience!  😉

Meanwhile, a good friend of mine was busy living the partying life at school.  His idea of a job back then was to donate plasma twice a week and maybe donate sperm occasionally as well… ah, the good old days!

The point is that most of my friends and I lived off some basic meals and didn’t really do much splurging (with the exception of necessary beer).  I’m guessing many of you found yourself in a similar situation.  However, things change…

I was making some decent money for a college kid and, because I didn’t have the time to really spend it, lifestyle inflation was not really a problem.  Eventually, I did the math and realized that, even though I was making good money, my hourly rated was pathetic with all the hours I had to put in.  That’s when I said goodbye to Walmart and became a Systems Engineer and then later the manager of the engineers.

I started to make a much better hourly rate and eventually a much better salary overall.  I paid off my debt and started to save money.  A good thing that came out of my past debt was my hesitance in spending.  But more importantly, the words of a fellow manager from Walmart resonated with me throughout the years.  He said “Once you start to make more money, you automatically tend to upgrade your lifestyle… it’s just the way it works.”

He was talking about lifestyle inflation.

And he was right (to a point).  As people’s income goes up, their lifestyle tends to go up as well. Things that were luxuries and wants as a college student now seemed to become needs.  When people receive a raise, they tend to want to treat themselves to something they want and I’m not talking about an ice cream cone.  Plus, they start to move into a nicer neighborhood and then start to keep up with the Joneses – maybe do some renovations like add on a nice deck, redo the kitchen and bathroom, and other projects that they justify to themselves that will “add value” to their home.

Remember my plasma-donating buddy from college?  We still get together today and he now makes excellent money and built a fantastic home for his family that I would have considered a mansion back in the day.  He makes sure he always buys the best – the best riding mower, the best and biggest TVs, and more.  He fertilizes the lawn so much that he mows twice a week and, for whatever reason, wants to fertilize even more!

I do my best to pull back on lifestyle inflation.  Have I bought a house in a nicer neighborhood… yes.  Do I own some “toys”… yes.  But I made sure that we didn’t buy an extraordinarily large house (and we got it for a steal!), and we’re careful about the toys that we do get (such as the occasional smart phone).

We do realize that every penny we save is a compounded penny over the years.  We try our best to not up our lifestyle as our income increases.  We shop for a good portion of our groceries at Aldi which is a discount supermarket chain that, for the most part, only sells generic food.  There are a lot of generics that we don’t taste any difference on or that we actually like better than the name-brand version.  And for the handful of generic products that we’ve tried that don’t cut it, we’ll pick those up elsewhere.  The amount we save on groceries because of this is tremendous.

We’re also getting better on cars.  I was a guy that could never get more than 100,000 miles on a car before it would die.  I used to be an extremely aggressive driver and I’ve always been hard on cars.  Not anymore.  The house we bought is now less than 20 minutes from my office – and that’s taking the back roads to get there.  Not only has the stress subsided, but I also have been a lot easier on my car.  I bought a new Chevy Malibu in 2009 and I only have 54,000 miles on it.  My game plan is to get a minimum of ten years out of it and, at the rate I’m going, hopefully longer than that.  My wife is on the same plan with her car.

We’ve also decided not to buy brand new cars anymore.  I’ve always enjoyed that feeling you get getting in the seat of a brand new car (who doesn’t?!!), but that feeling is a big old waste of money.  I think when I get my next car, I’ll probably get something still relatively new (maybe a year or two old), but not anything newer than that.

For me, a new car is great, but a used car can help me enjoy financial freedom earlier.  In my case, that’s more important.  In fact, maybe when I retire early, I might not need a car at all… guess we’ll have to wait and see!

The facet I have always struggled with is gadgets.  I’m in the tech world – how could I not love ’em?!!  I’m getting better… but I still get that itch.  My phone is only a year old and I’m already checking out the specs and reading the reviews on the latest phones (though I will hold off for another year).  I’m pretty good about other doodads though.  We have nice LED TVs, but they don’t have 3D or 4K or any of that jazz and I don’t need that stuff.

So is shunning lifestyle inflation the right thing to do?

For me it is.  I don’t need to spend a lot to be happy.  In fact, I tend to enjoy the challenge of not spending money.  But maybe you enjoy both working and living the champagne lifestyle and don’t have any kids.  Or maybe, like my college buddy, keeping up with Joneses is more important than financial freedom.  Or, maybe you’re wealthy enough that lifestyle inflation is not a bad side effect for you.

So how about – has lifestyle inflation been a problem for you?

6 thoughts on “Are You a Casualty of Lifestyle Inflation?”