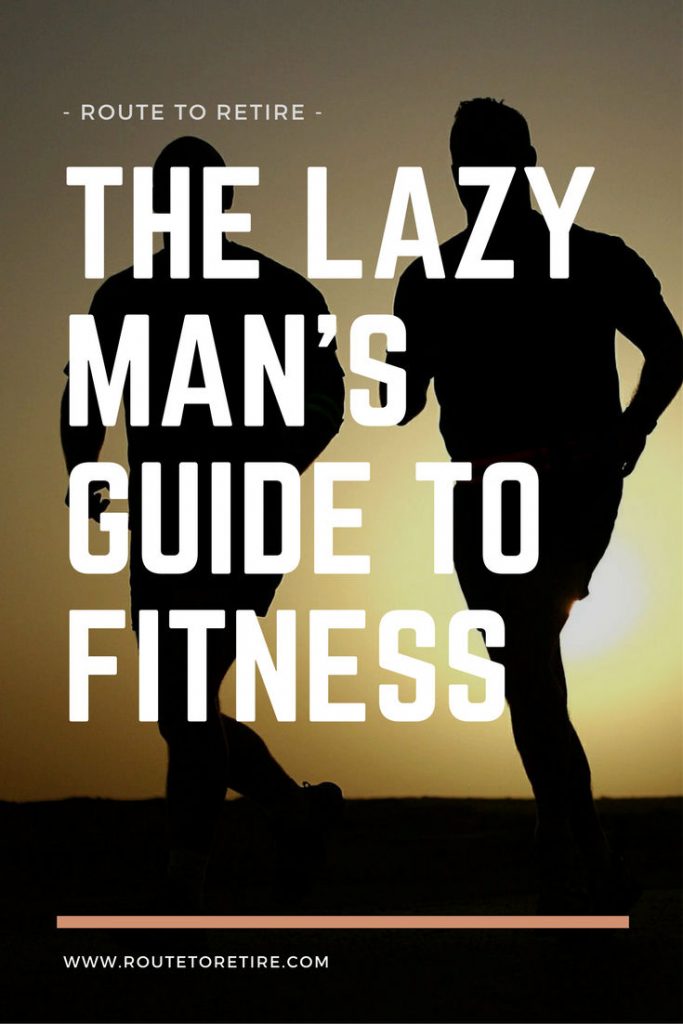 I hate exercise and fitness.

You know how some people talk about how running or a good workout makes them feel refreshed and invigorated?

Well, I’m not that guy.  I despise knowing I have to do it, I hate the actual exercise, and when I’m done, I’m just glad it’s over.

If you’re a guy or gal who’s on top of your fitness goals, this post probably isn’t going to be up your alley.

If I hate fitness, why do anything?

Well, that’s a weird question.  Even if I hate it, I know enough to know that if don’t do anything, I’ll fall into that cycle of becoming sedentary and feeling like exercise is too tough.  So then I wouldn’t do it and become even more sedentary making it even harder to start exercising.

And if that’s not enough, my doctor recently told me that my cholesterol is becoming borderline on the high side.  She talked about medicine if I don’t get it on track by next year… I ain’t doing that.

Most importantly, and the reason this fits into the realm of this blog is that I’m doing everything in my power to become financially free and retire early so I can enjoy life.

But what good is early retirement if you’re not around or not in good enough shape to enjoy it?

A lot of people dream of retirement and getting to do things they don’t have time for while working, such as traveling.  But if you’re not in good shape, you might not even make it that far.

The lazy man’s guide to fitness

Like a lot of folks, every now and again, I get that inspiration and motivation tick and decide that this is the year I’ll get rolling with exercise.

After kicking some #$% for a couple weeks, I get bored with it and hate it.  Then it just fizzles until I’m done.  Sound familiar to anyone?

So this time around, I decided to take a different approach.  I decided not to try to become a rock-star athlete.  I resolved to just do things a little lower-key and then see what happens.

Yes, we already know that I hate exercise.  Regardless, here’s my plan that seems to be working for me.

As part of my goals for the year, I started exercising, but I didn’t want to hate it so much I would give up on it.  So, I’m keeping it short and very simple.

In fact, when I started my exercise “regiment” at the beginning of 2017, I was keeping it so simple it was almost comical.  Here was my routine:

Yup, that was my entire process.  But guess what – it worked.  It was quick and easy and still got me off my butt.  I was doing it about 4-5 days a week and not hating it… success!!

I decided to up my game verrrrrrry slowly by increasing my push-ups and sit-ups by just one every week.  In other words, in week 2, I was just doing 11 push-ups and 11 sit-ups.  Eventually, I switched to doing push-ups before walking and then doing sit-ups after every walk.

Every month, I also increased my distance by 0.1 miles and my speed by a small amount (no set amount).

Up, up, up!  That sounds all fine and dandy… except for one thing.  My goal is to ensure that I don’t hate the whole fitness routine.  So I set a cap.

Here’s where phase 2 of my exercise plan is now being maintained:

Not as laughable as I started with, but I can still do this in around 20 minutes and not hate my life.

Ok, here’s where things are getting interesting.  One of the fun things I’ve had on my bucket list for a long time is to do a backpacking weekend.  For a few years, this trip has found a way to fall apart every year.  This year, however, I’m planning on going with someone who really wants to go, so it should finally happen.

We’re planning on going in the fall so I realized I need to be prepared to walk with up to around 30 pounds on my back.  I’m only around 5′ 6″ and around 135 pounds, so that’s a lot for me to walk around with all day.

So phase 3 goes like this… I continued the phase 2 workout, but I added a hiking backpack.  I left it empty for the first week (it’s about 5 pounds) and have been increasing it every week by just a few pounds.

As I write this, I’m now up to hauling just shy of 20 pounds on my back for every workout – around 4-5 times a week.

And guess what – I’m sweating like a pig every time I get off that treadmill.

The problem and the solution

I pushed my luck.  My back started to hurt from doing this so often and I was starting to hate exercise again.

With that, my fitness routine needed to change.  So I’ve just changed my program to continue with everything I’ve been doing, but only carry the backpack about twice a week.

Mission accomplished… exercise is back to being tolerated and I’m getting a good workout.

The lesson is that if you hate exercise as much as I do, keep it so light that it’s not a bother.  Find your limit and don’t jump past it.  Some workout is much better than none.

When I think of fitness, I usually think of exercise.  But, if we’re talking about being fit, I think it usually includes some health aspects to the idea.  So, here are a couple of other things that we’ve been working on in our household…

Look, we’re not perfect on this – far from it.  But we’re doing better.

That level of trust that we as a society have can literally be the death of us.  We buy processed foods in the store and just assume that it’s safe to eat because otherwise, the government would step in… not necessarily the case.

Yes, I’m sure that the really bad stuff will be kept out, but most of these ingredients are insane or just stupid.  Do we really need to have high-fructose corn syrup, monosodium glutamate, or red, blue, and yellow dyes in the food that we eat?

I’m a horrible cook.  As my daughter says, I’m only good at making pasta, pierogis, or ramen noodles (notice they’re all carbs)… so Mrs. R2R does the cooking.  And when she infrequently says I’m on cooking duty for dinner, it usually results in us ordering food.  🙂

So what’s our solution in the R2R household?

Just like the post title says, I’m all about laziness.  We don’t really make anything off-limits in our house, but what works for us tends to be a few things:

Don’t get me wrong, we eat junk food, but not a ridiculous amount.  Is it because we have better control than others?

Not at all – it’s only because we don’t have it or not a ton of it within a quick walk to the kitchen.  We would have to run to the store on a whim to satisfy a short craving and who wants to do that?!

We still go out for ice cream a few times every summer and enjoy treats here and there, but by just not keeping it nearby, I think we come out ahead.

Fast food’s an easy one for us.  It’s not because I don’t like it – who doesn’t like a Whopper, a Spicy Chicken Sandwich, or my favorite square fish… the Filet-O-Fish?!  Mmmmm.

The reason it’s easy for us is because it’s a waste of money and I’m too cheap to routinely overspend money on food.  I know that every time I blow money on fast food, it’s cutting into how quickly I can retire and I really don’t like that at all… so that’s that.

Mission accomplished (though we do make fast food a treat every now and again).

Cutting back on red meat has just been a change that took place organically in our household.  I watch too many documentaries and that really turned me off to red meat.  Mrs. R2R is not a big red meat eater either, so we’ve just started to eat more chicken, turkey, and fish over time.

Don’t get me wrong, we still get the random craving.  Sometimes we need a good burger and then we make it happen.

Simple and lazy.  Not perfect, but still puts us on a pretty good track.

I’m not ready to give up drinking completely.  I enjoy an ice-cold beer every now and again (mostly now).  Unfortunately, that “now and again” was starting to become more of the norm.

Therefore, I came up with a new rule for myself (conforming to the lazy man’s guide!).

The rule of thumb is that I just don’t drink on days when I need to work the following day.

That’s it.  That’s kept my recycle bin so much emptier than it used to be!

In addition, I think my tolerance has gone down.  So now I’ll have one or two beers on a Friday or Saturday and be feeling good and that usually seems to be enough for me.

The exception to my drinking schedule is that I can drink if I go out with friends or co-workers, maybe for a beer after work.  That’s so rare of an occurrence (maybe 3-4 times a year) that the exception seems to work Ok.

Mrs. R2R has joined the cause for the most part (it’s no fun to drink alone!).  So that’s worked well for us and cut our alcohol intake considerably just by making a rule and sticking to it.

One of my favorite bloggers and a major inspiration to me is Joe from Retire by 40.  His latest venture is a site called Fit by 40.  Based on some of his posts, Joe seems to be similar to me in build (and a little flab 🙂 ) to me, so I’m following along to hopefully get some of that same inspiration on the fitness side from his site.

Are you in pursuit of a healthier lifestyle?  What kind of things are you doing to put yourself on the right track?

14 thoughts on “The Lazy Man’s Guide to Fitness”