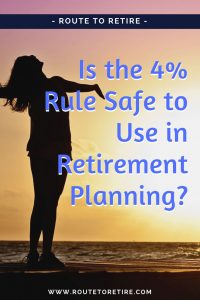 The 4% rule is probably one of the most well-known ideas in the FIRE (financial independence/early retirement) community.  It provides a way to put some actual numbers to your future needs.

But is it safe to rely on this rule for your own retirement planning?

Some background on the 4% rule

The biggest focus folks have in retirement planning is how much money they need to have socked away.  Will it be enough to sustain them throughout the rest of their lives?

Between the volatility of the market, inflation eroding the value of your portfolio, and you withdrawing money out of it, you need a solid portfolio in place.

But how much money do you need to make this happen?

Up until the mid-nineties, there really wasn’t a proven number you could use when planning your own retirement.  It was generally recommended that 5% be your safe withdrawal rate.  In other words, you could pull out 5% of your portfolio every year in your retirement until you die without running out of money.

The problem was that this was just a guideline and there wasn’t any concrete evidence that this would always work.

In 1994, a financial advisor named William Bengen decided to change that.  He performed a study that looked into historical returns and all the ups and downs of the market throughout.

What he determined was that even during the worst downturns of the stock market, there was no case that existed where a 4% annual withdrawal rate wasn’t sustainable for a retirement portfolio over the course of 33 years.

Financial planners now had something to use with their clients and the FIRE community has latched onto this idea as the golden rule for early retirement.

In 1998, a new paper followed called “Retirement Savings: Choosing a Withdrawal Rate that is Sustainable.”  In the FIRE community, it’s generally known as the Trinity Study and was written by Philip L. Cooley, Carl M. Hubbard, and Daniel T. Walz.

This study focused more on asset allocation and looked at historical data from 1926 to 1995.  In the inflation-adjusted numbers, it showed there was a 95% chance of success that a portfolio of 100% stocks should hold up over a 30-year period with a 4% withdrawal rate.

They also found that a portfolio consisting of 75% stocks and 25% bonds should have a 98% rate of success based on the data.

That’s a pretty strong success rate to see.  Thus, the 4% rule is referenced by many looking for retirement and particularly those looking for early retirement.

The 4% rule in practice

Putting the 4% rule into play means flipping it upside down with some basic math.

The idea is that if you can figure out your costs of living (your annual expenses) and get your portfolio to be 25 times that number, you’re now aligned with the 4% rule and no longer have to work.

Bear in mind that the Trinity Study took into account inflation.  In our example above, the first year you’d be withdrawing $40k, but the second year would be adjusted for inflation.  At 3%, that would mean you’d take $41,200 and it would increase every year.

Are you starting to see how simple this is for retirement planning?

Concerns with the 4% rule

Not so fast, bucko!  There are some concerns you need to take into consideration with the 4% rule…

The data used for the Trinity Study was over the course of 30 years.  The idea behind the study was for folks to see where they need to get to for traditional retirement.

Early retirees can have a much longer course that their portfolios need to carry them – 40, 50, 60 or maybe 70 years!

Part of the conclusion of the research even states: Early retirees who anticipate long payout periods should plan on lower withdrawal rates.

Right off the bat, the fellas are telling us to be careful when applying this to FIRE scenarios.

The Trinity Study looked at allocations consisting of different percentages of stocks and bonds.    They used the S&P 500 index to represent the stocks and long-term high-grade corporate bonds for the bond allocations.

Supposing that everything would work perfectly in the 4% rule, I don’t know anyone who solely has these allocations as their entire portfolio.

The Trinity Study does not include taxes or transaction costs in their numbers.

This is a big deal!  Depending on your FIRE strategy, taxes could take a pretty good bite out of your withdrawals.

So even if you have a plan, you had better have a good tax strategy in place as well.

Every financial institution in the world of investing has a disclaimer similar to “Past performance is not indicative of future results.“  There’s a reason for that.

All the research in the two studies that formed the notion of the 4% rule is based on historical data.  No one knows what the stock market’s going to do tomorrow, a year from now, or a decade from now.

So how are we supposed to assume that the 4% rule will work in the future?

We can’t.  No one knows what to expect.  Although the rule gives us something to go off, it’s really just some guesses based on how everything’s worked out in the past.

To top that off, here’s a headline for you:

That’s right, in early 2017, Jack Bogle – the legend the FIRE community puts on a pedestal for his visionary expertise – feels that the stock market is not going to produce exceptional gains as a whole for another decade.

Bogle is well respected by millions.  He’s the guy who founded Vanguard and brought index funds to the mainstream investor.  When this guy talks, people listen.

Now a decade isn’t the end of the world and the market is always moving up and down, but lower rates of return could skew your return as a whole.  If Bogle is accurate and you’re planning to retire during the decade of these nominal returns, you could be hurting your portfolio over the long haul.

If you’re pulling out more money than can keep up with the gains, that means you’re left with less principal to grow over the years.  Ouch.

If these thoughts make you a little uneasy about using 4% rule, they should.  They could hinder your entire future if you just tried to replicate the information in these studies.

One simple fix is to make your projections off a lower withdrawal rate.

It’s really a matter of what makes you feel the most secure.  No one knows how the future will go, but the lower your withdrawal rate, the better your chances of success.  Obviously, a lower withdrawal rate means you’ll need more in the pot of investments so you would need to keep building until you reach that point.

The 4% rule in regards to the Route to Retire family

On its surface, the 4% rule is perceived as your only source of income.  You invest in stocks/bonds and then quit your job when you have 25 times your expenses.

However, if you have other sources of income, you don’t necessarily need 25x your expenses (though it couldn’t hurt!).

As part of our plan, we have some rental income coming in.  We have a single-family house we’ve had since 2003.   We paid off the mortgage on the rental house with a HELOC in 2016 and then decided to pay off the HELOC in 2017.  So that property is now cash-flowing nicely.

We also bought a duplex in 2015.   Although that mortgage should be ongoing for a while, that property gives off a nice profit every month regardless.

Finally, we’re still deciding what we’ll do with the house we’re currently living in.  When we move to Panama in 2020, we’ll probably choose to rent it out instead of selling it.  So that would be some additional income as well.

The point is that we’ll already have some income coming in to cover a small part of our expenses.

The simplest way for us to use the 4% rule is to take our total expenses and subtract out the amount that will be covered by our rental income.  Then we can multiply the leftover amount by 25 to determine how much we’ll need to pull in from our stock market investments.

And that’s what we’re doing.

This is where some folks might feel that’s too aggressive of a plan.  However, we have a couple of factors that should keep us pointed in the right direction:

I like the 4% rule as a baseline for our situation, but I’m careful not to lean on it as the holy grail.  I think being conservative on several avenues should put us in a good spot for retirement.

The 4% rule is a great start to give you a general idea of where you ought to be heading in your retirement planning.  However, it should be treated more as a rule of thumb than an actual rigid rule.  Use it as a guideline just to keep you pointed in the right direction.

Is the 4% rule already part of your retirement planning strategy?  If so, how strict are you using it in your plans?

22 thoughts on “Is the 4% Rule Safe to Use in Retirement Planning?”