I recently came across a question in the FinCon Community Facebook Group relating to the FIRE movement (financial independence / retire early).  It was asked by Jeff Rose, creator of the Good Financial Cents site.

If you’re not a member of the FinCon Facebook group, you likely won’t be able to access this link.  However, the question asked was “Who disagrees with the FIRE movement and why?”

The post drew quite a number of comments that spanned all sorts of opinions and it made for some interesting reading.  Some comments I nodded my head to while others I disagreed with.

Regardless, it got me thinking about my own path in life.  FIRE was a very important component of my life in that it’s given us the chance to be where we are today.

As someone who recently reached financial independence and left his job at the end of 2018, I wanted to share what the FIRE movement means to me.

A lot of folks seem to disagree with the “RE” in FIRE (financial independence / retire early).  And “Retire Early” isn’t necessarily the problem, but the connotation of retirement in general.

Joshua Sheets from the Radical Personal Finance podcast, someone I respect tremendously, chimed in and said retirement carries a feeling of non-productivity and idleness with it… 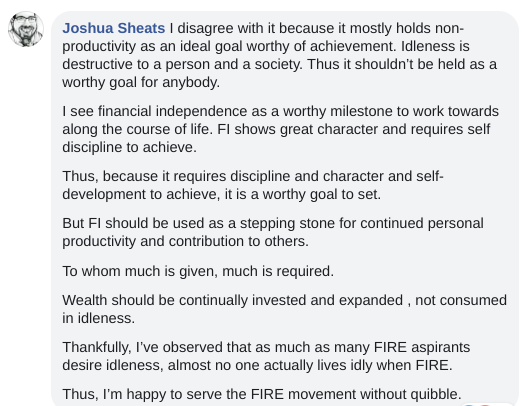 I think that’s a fair sentiment.  The word “retirement” can still carry the vision of being old and gray and sitting in a rocker all day.

But… I also think that’s not always the case.  And with younger folks that have “retired”, they’re finding plenty of ways to keep busy.

Those are just two quick examples, but they’re not the exception to the rule.  Everyone I know who has retired early has found plenty to do to keep themselves occupied and out of their rocking chairs.  I know that I can’t imagine being unproductive in life during retirement.

I think the idea of idleness and non-productivity in retirement is something that can be associated with just some of the older folks nowadays.

The feeling of being stuck 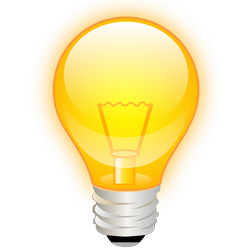 But the most valuable part of the FIRE movement to me is actually just the awakening that it can provide – the realization you don’t have to just continue down the same path in life.

Some people love what they do at work and that’s fantastic… it’s really the ideal scenario. You’re staying busy doing something you enjoy and you’re getting paid to do it.

But that’s not where everyone is in life.

In the August 2019 report from The Conference Board, 53.7 percent of workers described themselves as satisfied overall with their jobs.  In a solid job market like we’re currently in, that’s not a huge surprise.

However, that still leaves almost half the workforce as unhappy in their jobs.  That’s a lot of people feeling unsatisfied with their work-life.

And I can almost guarantee that this unhappiness with work carries over into their personal lives somewhat as well.

I was part of that percentage that wasn’t happy.  Unfortunately, I also felt stuck, which I’m sure is a feeling shared by a lot of the unsatisfied folks in their careers.

Can you change careers and do something else that you might enjoy more?  Sure, but many times that’s easier said than done.  There’s a mind trap where you feel stuck in a catch-22.  You don’t have the extra time to experiment with different things to find what you’d enjoy doing with your life.

And even if you already know what you enjoy, you likely need to get training to become good at it.  If you’re married, possibly with kids, you now have to consider how the change will affect them as well.   And how do you spend enough time with your family while you’re doing all this?

These may or not be excuses, but they’re legitimate thoughts that could be running through your head (they were in mine!)… and you just feel stuck.

For some, they just want to reach financial independence so they have the freedom to quit an enjoyable job if it becomes less enjoyable down the line.  Or maybe just to have the financial security in place in case you need to leave a job unexpectedly for things like health, layoffs, or to take care of family members.

Some folks still want to work but maybe a little less.  Maybe they want to go part-time to be able to spend more time with their kids.

For others, they want to reach FIRE and quit their jobs entirely to have the time to pursue other interests and hobbies.  In most cases, they’ll end up finding another income stream, but money’s not the driving force anymore.  More importantly, failing can be much less catastrophic (especially if you have a family relying on you).

Some people want to start a new business, but currently can’t take the financial risk or have the time for it yet.

Whatever the reason the FIRE movement sparks an interest for you is a-ok.  The key is that it opens your eyes to realize that there are in fact other viable options out there and there are others actually pursuing those options.

That was the motivator for me.

I wanted out of my career even though I worked for a great company with a great boss.  It was just time – time to explore new options in life.

When I stumbled on Joe Udo’s Retire by 40 blog years ago, it made me realize that I really could make some choices to go in a different direction.  We already had a large amount saved and just needed to step up our game to make it happen sooner than later.

I didn’t have all the answers on what I would do once I left my job (I still don’t!).  However, I do know that the FIRE movement led me down the path of putting the power back in my hands.

Realizing that there was an alternative to working in an environment I felt trapped in gave me the motivation to set a new course.  In my case, the FIRE movement gave me the path to a new kind of freedom…. the route to retire, so to speak!

Why the FIRE movement is so important

Initially, I did plan on more of a traditional retirement – hell, I even called it out when I named my blog “Route to Retire.”  I had the dream of just sitting on the beach all day sipping piña coladas.

But then I realized that would get old really fast.  I always find ways to occupy my time and struggle to even sit still and just watch a movie sometimes.

Now that I reached FIRE and left my job, it’s wonderful to know that the power is completely in my hands to determine my day… and idleness just ain’t a part of it!  I spend so much time working on different things that sometimes I still feel like there’s not enough time in the day.

Although I’m staying so busy and knocking out tons of list-items that I’ve wanted to get done for years, I do have more time with my family.  Being able to spend hours a day helping my daughter learn new things and just be a bigger part of her life making memories is amazing in every way.

And, I have the FIRE movement to thank for this.

Even though it means so many different things to different people, it’s the inspiration and motivation that so many of us need to make a change.

Here’s the beauty of FIRE: not everyone will reach financial independence, but you can bet your ass that those who take the FIRE movement serious will find a way to put themselves in a much better position financially!

And not everyone will “retire early.”  Some may stay at the job they love for the rest of their lives.  But I can make a pretty good educated guess that those who dig into the FIRE movement are at least seeing that there are other options and can make a decision on their future from there.

That’s 100% the point.  The FIRE movement isn’t about this or that – there are no solid rules.

FIRE doesn’t need to be a finish line where you become financially independent and quit your job.  You can be a member of the community, learn and make some small changes, and walk away with saving over $50k in 401(k) fees.  That’s still a successful member of the FIRE community in my book.

It doesn’t matter if you continue to work forever or only use it to improve your knowledge of personal finance.

For me, the FIRE movement meant exploring a reinvention of life.  And in my case, reaching financial independence was the best path for me to take to do it.

I now try new things and different projects and don’t have to worry about the financial impact this could have if I had tried to do this as a career change.  On top of it, I’m able to spend even more time with my wife and daughter while still getting to grow my knowledge in different areas.

I try not to take life too seriously and always have fun, but the power of the FIRE movement has led me to a life that has provided even more happiness.  How else could we even be enjoying every minute of our adventure together in Panama?

In other words, don’t let the word “retire” fool you, the FIRE movement is more of an ideology than some strict set of rules.  And the shared belief is that you can do something outside of the norm to give yourself a new opportunity in life with whatever path makes sense for you.

What does the FIRE movement mean to you?

14 thoughts on “What the FIRE Movement Means to Me”