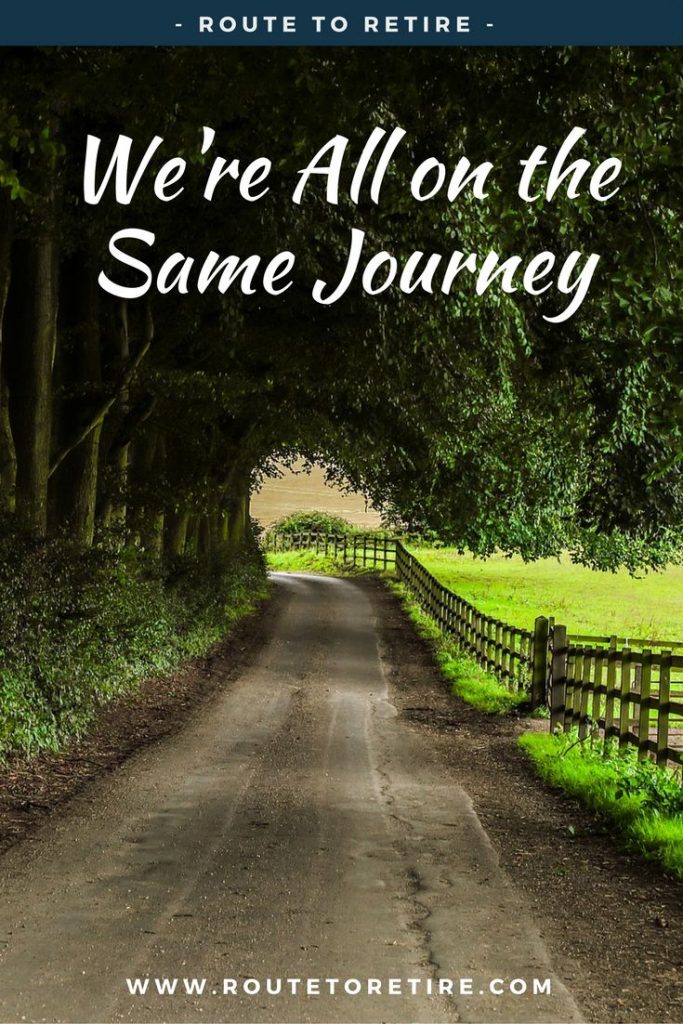 The journey to FIRE can be an arduous path.

Sometimes I struggle with the content I want to put on this blog.  It’s not due to a lack of ideas, but rather a matter of wondering if the reader can relate.

Some of you are just starting to get interested in the idea of financial independence.  Perhaps you’re saddled with debt, but know there’s got to be a way out.

Others of you are in your wealth-building stage of your life and you’re working on banking whatever you can.

And then there are some of you who have already reached retirement – whether it be early or not.

Finally, there is a group of you who have not only reached financial independence at an early age but also done so with overall impressive amounts of wealth on your side.  It might be a high net worth, a solid cash flow, or a combination of both.

Regardless of where you are in the journey, this leaves me with a broad audience to serve.  I try not to overthink it, but I do try to consider this in my posts.

Earlier this year, I published one of my most popular posts, $1 Million Net Worth… Now What?.

It took me a lot of thinking before I wrote this to decide if it was the right thing to do.  I’m definitely proud of our achievement, but I didn’t want it to be taken as boasting.

Nevertheless, I’m glad that I published it and I got a lot of good comments.

However, I also received some pretty negative feedback, particularly from one reader who definitely didn’t enjoy what he read…

The humble braggarts are at it again.   First one step, then two, and before you know it, we should be multis.  Take part of your horde and travel the globe, and see what most people can expect and get from life.  Most will live and die and never seem a smidgen of that.  Stop being so greedy, and leave the casino!

This bugged me a lot – probably more than it should have.  I ended up not approving the comment (although, looking back, I wish I did).  Instead, I took the time to email the reader back personally on why I posted it.  I didn’t hear back and for all I know, he may not have even seen my reply.  However, I felt compelled to send it out nonetheless.

The point is that the post was misunderstood because the wrong audience read it in this case.  He’s likely not on the journey to FIRE and has no interest in the idea.  Because he doesn’t believe that he can make it happen, he likely never will.

I think the reason that the $1 million post continues to be so popular is that people want to know that this really is possible to do… and that’s exactly what I was after.

When I first started digging further into the idea of financial independence, I came across guys like Joe at Retire by 40, Sam at Financial Samurai, Mr. Tako at Mr. Tako Escapes, and Michael at Financially Alert.  These are young, normal guys that made me see that it was achievable.  It’s possible to get out of this rat race without needing to be old and gray first.

And what I like about these guys is that they weren’t afraid to show and talk about their finances.  Here’s what I did, here’s how I did it, and here’s how I’m doing today.

That is why I created my post and shared my numbers.  If I can help motivate just one person to see that it’s absolutely possible for an average Joe to optimize his or her life to get on the right path financially, then it’s well worth it.

Funny enough, those same guys who inspired me were also the ones I was envious of at the beginning.  I didn’t have much money at the time.  How could these regular guys make this happen?

Every excuse popped into my head…

The list could go on and on.  But you know what?  That envy was also my push to motivation.

I spent hours upon hours learning everything I could about personal finance and the quest for FIRE (in fact, I still do).  And as I learned something, I’d make a little change here and a little change there.

Eventually, I started to see a little bump in our net worth… and then a little more and a little more.  And it seems as though the more I continue down the path, the easier it becomes.  In other words, it took some time, but then things start to snowball in a good way.

I still look at how these guys are doing and wonder if I’ll be in as comfortable financial shape as they are, but even if I don’t… I’m getting closer!

Like a lot of folks, when I first got out of college, I was bogged down with a large amount of debt.  Unfortunately, a lot of mine was credit card debt… almost $30k!

It took some time but I found my way out of it.  And it wasn’t because someone bailed me out or any other easy path out.

It was because I buckled down and sucked it up.  I cut back tremendously on going out and spending money frivolously.  It was my bed and I had to lie in it.

It wasn’t a fun time, but it needed to happen.

If you’re willing to do the same, you’re in the right place.  It’s absolutely possible to dig yourself out.

However, if you’re not willing to face the pain and make it hurt, you’re in the wrong place.  And the bad news is that you’ll probably stay in that position for the rest of your life.

My point to all of this is that we’re all on different parts of the journey.

What I’ve realized though is that it doesn’t matter where you are on the path.  Whether you’re saddled with debt or you’ve already reached FIRE, the important thing is that we’re all on this same journey.  We all want to take control of our lives and have the freedom that financial control can give to chase after our dreams.

Hopefully, you’re reading this because you’re aiming to become better financially.  Where you’re at on the journey is irrelevant as long you’re focused on the destination and keep moving in the right direction.

I hope my content helps to motivate you along the way.  Good luck in all you’re after!

Where are you in your financial journey?

26 thoughts on “We’re All on the Same Journey”