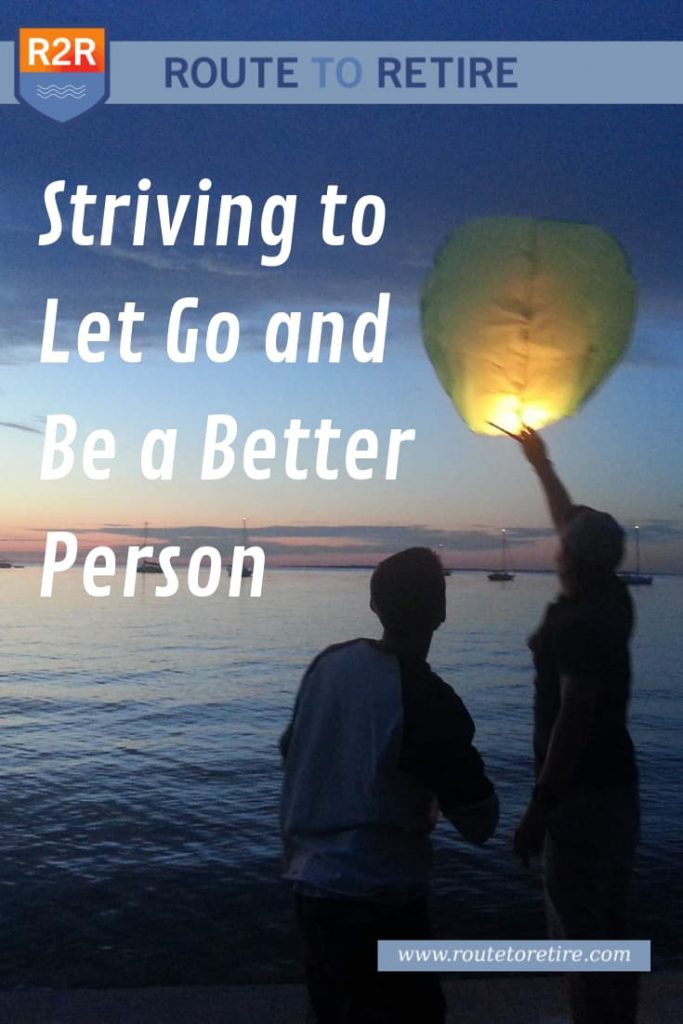 Well, tomorrow is the big day… we’re finally flying out and moving to Panama!  And with that, I thought it would be a good opportunity to talk about change and my plans to be a better person.

That’s right – who woulda thunk I could be any more of a better person than I already am?!  Well, guess what – even people like little old me have a little breathing room to improve on in our lives!

So let’s start on the side of letting things go…

I’m a planner and a worker and always have been.  Organization is my middle name.  When a trip or event is being scheduled with friends or family, I’ve generally been the one to coordinate the plans.

I analyze and then over-analyze every detail to get everything – and I mean everything – lined up as close to perfect as possible.  That’s not just the flights or hotels or rental cars, but the details on possible itinerary ideas, costs, specials and discounts, places to eat, etc.

But here’s something weird – over the last year or so, I’ve noticed that slowly changing.  I’ve started to step back a little more on this stuff…  on purpose nonetheless.

My wife, Lisa, stepped up to the plate to fill in on my lax behavior.  When the group texts are going on with the planning, I used to be the one leading the pack to get all the details ironed out.

Now, I generally ignore my phone and all the countless messages in the chain until later on.  Lisa fills me in and makes a lot of the decisions on our behalf.

Did I lose my edge?

I really don’t think so.  In fact, I think I’ve become more focused on life in general.  But I’ve noticed that my priorities are changing and in a good way.

I tear up a lot.  I watch sad movies, I cry.  I hear sad stories from others, I cry.  Hell, I can even watch a touching commercial and start crying.

Yeah, I’m not afraid to say it.  Feel free to make fun of me in the comments.

The thing that gets me the most though is when terrible things happen in this world.  Like most everyone, it rips me up inside to see news stories about bad things happening to kids, rapes, murders, terrorist attacks, and other garbage.

It seems like there’s too much evil in the world.  It’s also why I don’t watch and barely read the news anymore.

But one facet that always seems to weigh on my mind is homelessness.  It tears me up seeing homeless people on the street with no place to go.  And I hate it even more that it might not be legit and could be a scam artists posing as a beggar asking for money… scum!

My mind starts to wander and I start thinking “if only…”

Most folks are good, there’s just a small percentage of evil in this world.  If only these few bad apples weren’t around, this world would be a better place.

If only there was a way to eliminate the filth from the world.

We jump to judging people even though we don’t know their background.  Most of us are fortunate that we grew up in a semi-normal environment (yes, all families are insane, but you know what I’m saying).

Unfortunately, we live in a complex world.  We live in a world where we have war.  But not “simply” war for one’s principles, but war because it helps the rich get richer.  It helps strong countries pump their chests and flaunt their power in order to keep pushing others down.

Bad things happen.  That’s life, right?  So what can I do about it?

Aiming to be a better person

I feel like we’ve now reached a plateau where we can make some decisions in life we’ve never been able to make before.

It’s not because we’re rich (we’re not), but rather that we now have time on our side since I retired from my IT career.

And I absolutely don’t want to squander it away.

I’m now able to spend more time than ever before focused solely on my wife and daughter.  I can’t even explain how freeing and wonderful that is.  But soon I want to take some of my time and move to the next level of giving back.  I want to let go of all the pressures of things that don’t matter and tune in on the things that do.

I’ve never really been able to give back to others in ways I should.  My wife, Lisa, worked at Make-A-Wish for several years and loved the opportunity to help give special moments to kids that needed it.  I’ve never done anything like that.

Then there’s the other side of things.  Physician on FIRE started a Donor Advised Fund years ago to help give back.  This is a fantastic way to give financially and give yourself some good tax breaks along the way.

However, although we’re now FIRE, I failed to allocate charity as a line item in our budget.  Yes, I’m a horrible person, but that can change as we start bringing in more income through sources like this blog and other projects.

But I think what I’d like to do is start helping those in need directly.  Maybe it’s working in a soup kitchen to start with or something of that nature.

Eventually, though, I’d like to take it a step further and become more of a humanitarian.  I don’t know what exactly that’ll mean yet, but I just feel like I need to be doing something.

We’re in such a fortunate position to not have to work.  And then there are so many folks out there who don’t even know where they’re getting their next meal from or where they’re going to sleep.  It bothers me tremendously.

In a capitalistic society, there will always be a subset of people who are rich and a subset who are poor.  It’s just the way it works, unfortunately.  But that doesn’t mean that we should be ignoring those less fortunate than us.

Right now, this is all talk.

It’s just me thinking about what I really want, although “the proof is in the pudding” (what the hell does that even mean?!).  Once we get settled in Panama, I hope to start small and begin to do something that actually matters in life.

I don’t want to be remembered as the guy who was able to quit his job and retire at 43 (though that’s not too shabby of a thought to be known for!).  I’d rather be remembered for being someone who made a difference… someone who was leading the way in helping others.

Be a better person through leadership

I look at people like Bill and Melinda Gates who founded the Bill & Melinda Gates Foundation in 2000.  It strives to reduce inequity in the world.  They do so many amazing things to help others with their focus on:

And they move ahead full steam making huge strides.  Not only that, but they’re reported to be the largest private foundation in the world ($50.7 billion in assets!).

Here’s a guy who was known to squash others in the world as he grew Microsoft into its dominance in taking over the world.  He could have just taken his money and spent the rest of his life on a yacht cruising around the world.

Instead, he’s using his money and influence for good… he’s like a super-villain that turned into a superhero!

When I see people like this, I start to wonder, “Why can’t I do this?”  Ok, he had a lot more money and connections to get it started and make it successful, but the key is that he did get it started.

I might not be able to do something this incredible, but I want to find a way to help others as best I can.  And just because it’ll start out small doesn’t mean I won’t be able to grow it into something bigger.

On top of that, I can’t seem to shake this feeling that I’m supposed to be doing something big… like really big.  I’ve actually had dreams about this since I was a kid.

There’s a nagging thought I should be leading the way for something.  I’ve never really known what that “something” actually is, but maybe that’s part of my desire to be a better person.

Very convoluted, right?  What the heck am I saying with this?

I wish I knew the answer, but I don’t.  I just know I have a great opportunity to make some changes in my life that can help others.  And maybe this idea of leading the way might be a part of it.

Maybe, I need to start a foundation to help change the world.  Or perhaps it would be better to be an advocate for a cause that’s already rolling strong.  There are so many different ideas and choices I can be doing.

I have a lot of thinking to do!

But one thing at a time.  I need a little bit of time to get settled into this foreign country first.  After that, it’s time to get off my butt and do something good for others… time to be a better person.

It’s hard to argue that striving to be a better person is a worthwhile goal in life and I’m open to ideas big and small… talk to me!